This is my five minute meditation after working virtually this morning.

This is for people who say they cannot meditate.

This is to say that the point of meditation is not to empty the mind of thoughts.

Although this may become a result over time, this is not the purpose.

Thoughts are always with us. Notice them. Label them. Let them go.

If you wish to follow my meditation to see what I am talking about, it is written below, pretty much as it happened. Follow the instructions to breathe slowly as you read each line.

(Names have been changed.)

Breathe in. The cat is purring beside me.

Breath out. She’s stirring, gonna step on me.

Breathe in. Aw, she's nuzzled in so nice now.

Breath out. She did this with Mom.

Breathe in. I sure do miss Mom.

Breathe out. This cat keeps me connected to her.

Breath in. So many cute pets in our Google Meet this morning.

Breathe out. I hope those kids are alright.

Breathe in. I worry for some who we have not yet seen.

Breathe out. Especially Billy and Susie and maybe Elliot

Breathe in. I hope my own child is ok.

Breathe out. I will call her later.

Breathe in. When I get my results back.

Breathe out. I sure hope they are negative.

Breathe in: Why is it taking so long?

Breathe out. Come back to the breath.

Breathe in. Yes.  Focus on the breath.

Breathe out. I wonder how Ash is doing?

Breathe in. I wonder how everyone is doing?

Breathe out. Thoughts are there, yes.

Breathe in.  Doesn’t mean they must be followed.

Breathe in. Breathe in kindness

Breathe in. Breathe in patience

Breathe in. I’m so relaxed now

Breathe out. Notice, “Thinking and Planning”

Breathe out. Notice, “Worry and Fear”

Breathe in. This is meditation…

Breathe out. Notice and Name.

Breathe in. So many rules.

Breathe out. Just be.

Breathe in. Just be

Breathe out. Just be

Posted by karmacoy at 5:01 PM No comments: 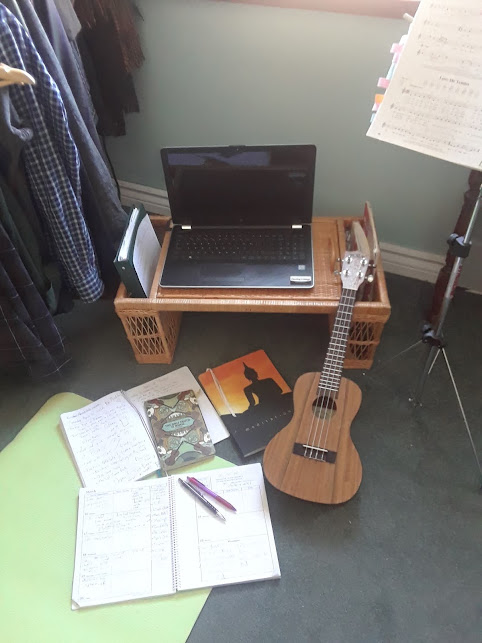 Posted by karmacoy at 4:20 PM No comments:

I've more or less abandoned  this poor blog. If only I had the time to revitalize it. Oh well Here is a pic of my darlin daughter and her costume that she made herself to be one of her most favourite things ever.

She fashioned the wings from wire coat hangers and coloured duct tape. 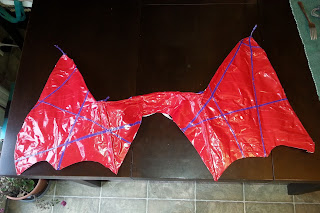 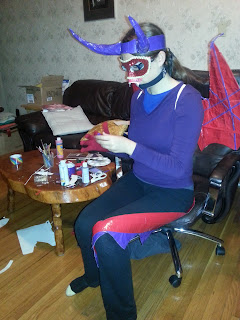 The wings needed a little reinforcing with a metal curtain rod, covered in duct tape. 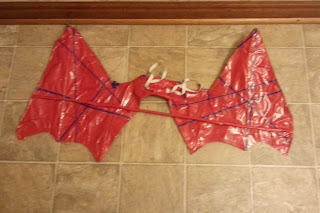 She adapted a dollar store mask to accommodate her glasses and added snout and lower jaw with bristol board that she cut, coloured and decorated. 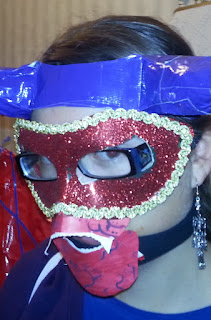 And voila, the fiercest looking dragon in the land. 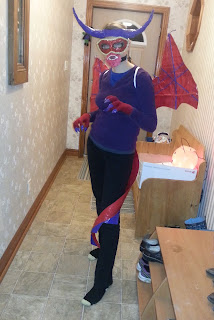 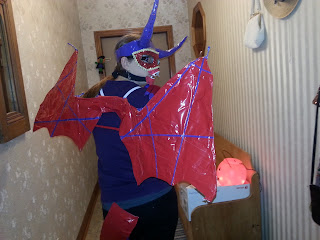 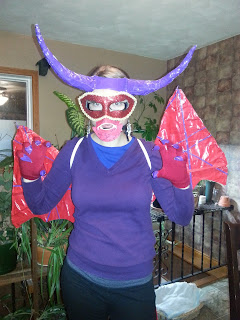 I'm so proud of her and the great job she did.
Happy Halloween!
Posted by karmacoy at 9:49 AM 2 comments:

I am missing this blogging thing.

Especially since discovering Pinterest. So many cool ideas out there.
I have cool ideas too. I want to share them. I want to spend time creating and taking pics and "pinning" my own great ideas.
I look at these prolific "pinners" and wonder...

how they do it?

How does one make the time to make and do so many wonderful things; sew, cook, bake, craft, and then pin thousands of items to dozens of boards and blog about it all? And of course they are all mothers to at least four kids as well. Where do these super humans come from????

I am not super human and I seem to have inherited the lazy gene. But still, I do have the desire to create, it's just at a snail's pace that I do so.

I have been thinking lately of starting a new blog.
One to blog solely about my work in kindergarten.
About the learning centres and the adventure I am on to implement play based early learning through an inquiry stance in my classroom.
I may get around to starting that blog, but chances are...
I won't.

Today, I have some unexplained burst of creative energy and am bursting with ideas.
This hasn't happened in some while and yet, I am skeptical about the likely hood of this "burst" sticking around for long.

Of my long and ever growing list of things I want to do (work-wise), I have recently completed one; to make a felt board.
And since I have made a felt board, I now want to make some more felt board stories.
I have mostly felt shapes and flowers and pumpkins and apples and such, but not many real stories for the purpose of re-telling.
We have recently been reading and retelling Goldilocks and the Three Bears and so I decided to make the pieces for this story.
I am not done yet, but today I got a good start by making the bears.

It did take me a while.
First, I researched bear patterns online, google images and pinetrest pages to find the style of bear I would like to utilize.
I considered buying (via Etsy) this one that I found by Jean at The Artful Parent, until I discovered that it was no longer for sale.
And so, I used the image as my "pattern"  after which to fashion my own bears.
I then spent considerable time drawing (and erasing) the bears, attempting to get the sizing just right. Then I cut them out and traced them onto the felt that I had bought last week.
Next, cut  the bear shapes out of the felt.
Searched the entire house for the googly eyes that I know I bought a couple of weeks ago.
Finally found them in a pile of things in the Spare Oom/Office/Craft Room.
Found some fabric samples to make the clothes out of. Made and cut out the bear's clothes.
Hot glued it all together.
And my finished product... 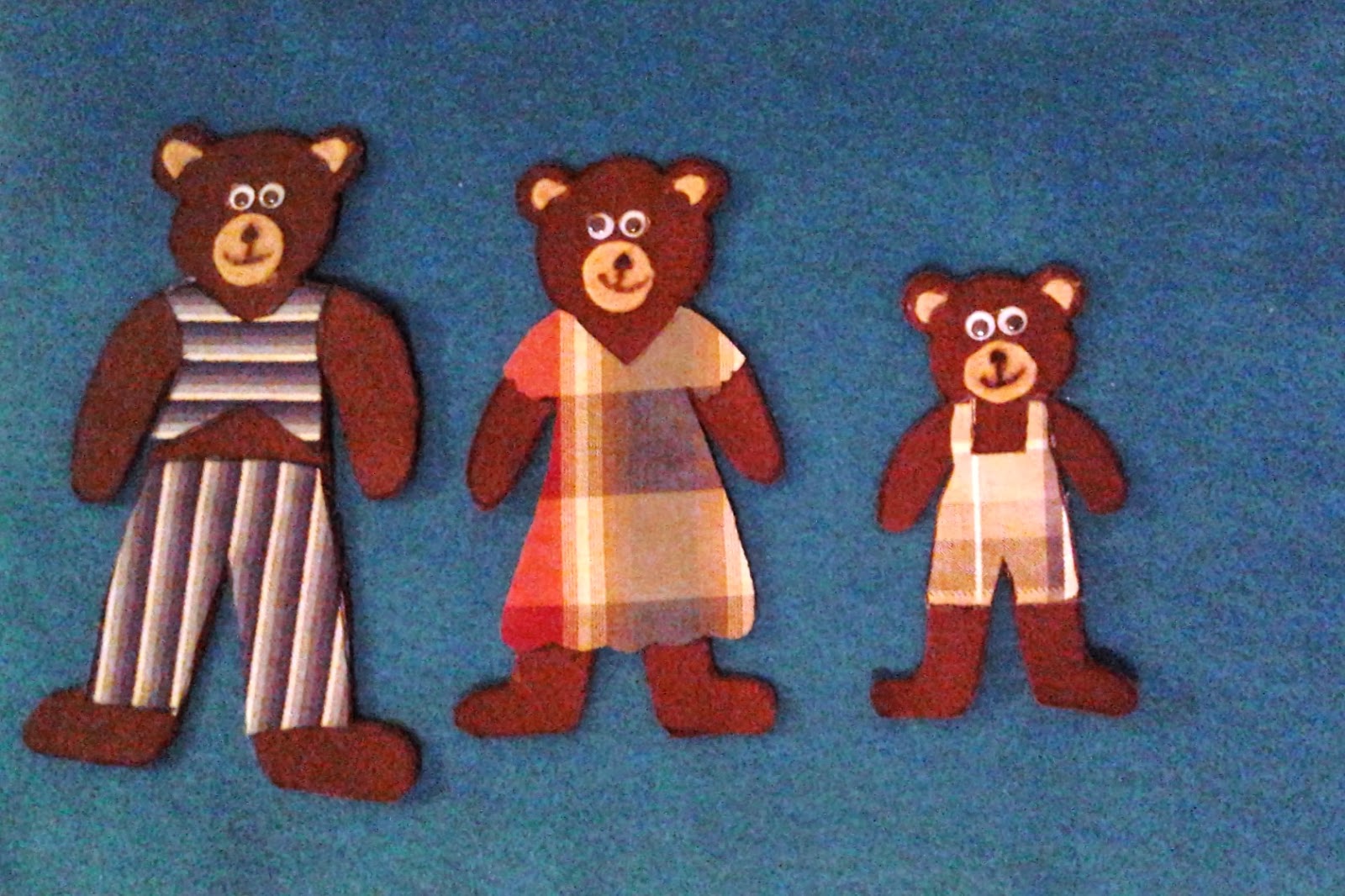 The rest should be easy from here.  Some bowls of porridge, a few chairs and beds.
Oh and Goldilocks, of course.

Going out tonight and taking these tasty little appetizers... 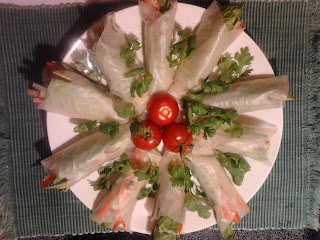 Sesame ginger dressing over romaine lettuce, sweet onion, carrot, red pepper, celery, cucumber, avocado and pear all wrapped up in rice paper.  The cilantro I used just for garnish and it is not inside the rolls as some people just don't like it.  If you do like it you can stick a sprig into your wrap, all depends on how you roll!!
Posted by karmacoy at 5:39 PM No comments:

Some Before and Afters

The house has kind of got away from me while I was off all summer long and now it is October and I need to get it back!!

I did a huge desk tidy a couple of weeks ago. 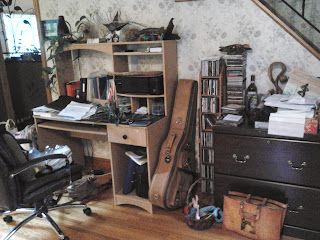 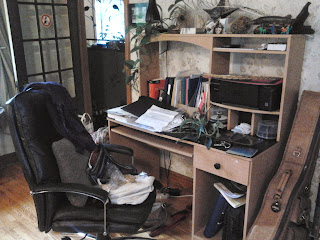 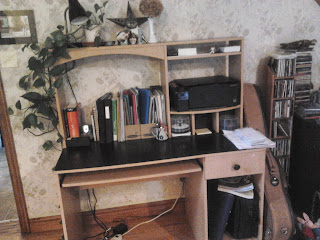 After
And then a couple of weeks later it started to get out of control yet again: 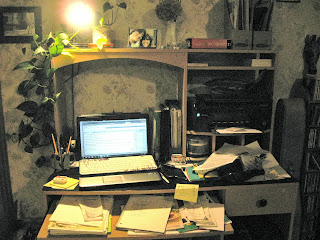 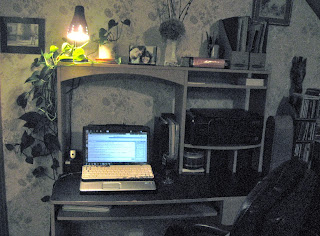 Much better (although grainy photo quality, flash not working)
And that isn't even the half of it. Here was the mess of my dining room table: 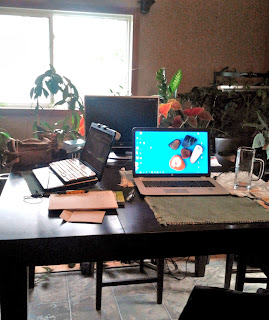 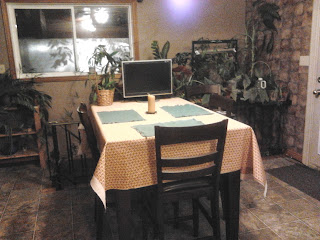 After
Ok, that's it for now, will post a few more before/after shots later.﻿
﻿
Posted by karmacoy at 11:50 PM 3 comments:

Okay, this for all the Flybabies out there!
THIS, makes me smile.
Thank you to ALL my cheerleaders (you know who you are!!)
That is all. 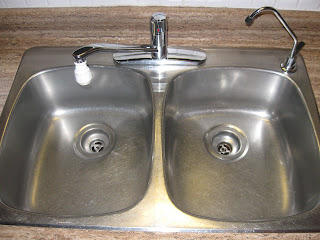 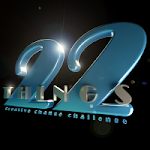 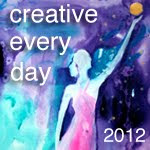 karmacoy
I am a singer and a writer of songs and stories. I teach kindergarten and yoga.